Marcus began his studies on the instrument at the age of ten, having his father as one of his first teachers. The Brazilian guitarist has strong roots in classical guitar, Brazilian jazz and a variety of other styles. He was a soloist with the Dubuque Symphony Orchestra and the Southern Illinois Symphony and, has performed in variety of jazz ensembles such as the Larry Busch Big Band, Hunter Fuerste Vintage Jazz Group and the Mistletones. In addition Marcus regularly performs with his own group the “Blu Flame Duo”, which it features Marcus on the guitar and Brian Eiffes on vocals. The two musicians met during the time they attended Clarke and their music gives a modern approach to Bossa nova and American jazz standards. As a solo performer, he recently performed a recital tour in Brazil during the summer of 2015 and is an active concert guitarist in the US. Marcus has collaborated with other local artists such as Brian Eiffes, Megan Gloss, Jim Sherry, Jill Klinebriel, David Resnick, Larry Busch, Ben Drury, Cameron Shoutes and others.

During his free time, he enjoys running, hiking, watching movies, attending other art events, cooking and spending time with family and friends. His philosophy of teaching and life is that is important to “be yourself because everybody else is already taken.” Music allows humans to express what is between sentiments and what words cannot describe.

Marcus DeJesus is a young guitarist originally from Brazil that currently lives in the Dubuque Tri State Area. He is a professor of guitar and general music at Clarke University and Loras College in Dubuque, IA. In addition Marcus is the music director at Chavez elementary school in Madison WI. In the spring of 2016, he finished a master’s degree in guitar performance from Southern Illinois University (Carbondale, Illinois) and in the spring of 2014, a bachelor’s of arts in music performance from Clarke University. Living in the US for about eleven years, Marcus has studied the guitar with Dr. Zane Merritt, Dr. Isaac Lausell, Dr. Miles McConnell, composition with Dr. Amy Dunker and voice with master John Lease. In Brazil, he has collaborated with the master Moacyr Teixeira Neto who teaches at the FAMES Music Conservatory situated in Vitoria, ES. That is where he studied during the summer of 2012 and has returned regularly to perform and lecture at the service of the school. He plays guitar made by Brazilian luthier Luiz Antonio Miranda. 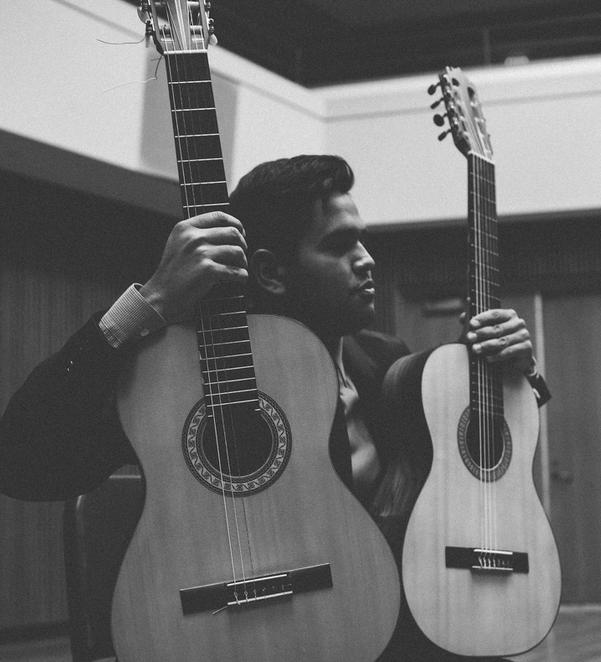